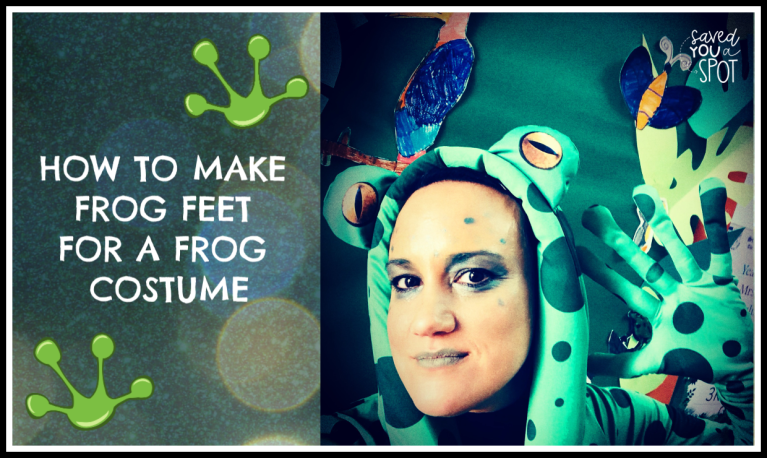 Are you trying to think of what you might dress up as for Halloween, Carnival or Book Day? Below is an idea that fits into all the above categories perfectly. Those of you who are familiar with the children’s books ‘The Princess and the Frog’ or ‘The Frog Prince’ will love this idea for a book character! You can buy a frog costume like I did from Jumbo, a cheap store here in Greece, a bit like Primark or Target in the U.K. and U.S. respectively.

For those who can’t easily come across a onesie like mine, or don’t want to spend additional money you can effectively make your own costume by pairing green leggings with a green top, adding a hairband and gluing some frog eyes on it and voila a super easy frog costume!

Now, even though I thought my costume was great, what it didn’t have was frog feet. How could I be a frog without frog feet? So I got thinking and came up with a solution that worked really well! It was practical enough for school and both kids and adults found it hilarious. I will never forget the kids’ faces when they saw me.

Follow the instructions below to make the frog feet your frog costume needs to be complete!

First, place your plimsoll on the green felt and draw the frog’s foot around it, with a pen. Make sure to leave approximately an inch all the way round.

Next, cut around it and use it as a template to draw 3 more. Altogether you will need 4 frog’s feet.

Then place one on top of the other so that you have two feet, it doesn’t matter if they don’t match exactly.

Sew around the edges approximately 2/3 of the way around.

Take all the left over pieces of felt , cut them up into smaller sections if they are too big and stuff them into the sucker/toe and foot. Use the chopstick to push them right in, all the way to the end.

Leave enough space to place the shoe into the frog’s foot and sew the remaining section of the felt.

Now carefully make a hole in the top and cut a slit. Gradually open it with your fingers and make it big enough to let your foot go into the shoe.

Lastly, sew the green felt all the way around the plimsoll so that it stays in place.

Below are photos from the final frog costume. I hope you find them ‘ribbeting’! 🐸🐸🐸

Now, all I need is that kiss to turn into a princess! 💋