Wonder is a children’s novel  about bullying, acceptance and appearance. It is written by Raquel Jaramillo, under the pen name of R. J. Palacio and published in 2012. 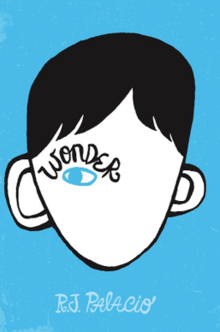 Wonder is about a fifth grader named August, who was born with a rare facial deformity. After being homeschooled, his parents decide to send him to a school called ‘Beecher Prep’. Though he struggled at first to show his classmates that he is an ordinary kid, he eventually succeeds in proving that there was more to him than meets the eye.

What did you think of the book?

I liked the book. A scary part is when Aggie is verbally and physically assaulted because of his appearance, one night in the woods, by some seventh graders looking for trouble. I learned that no matter how people look, we’re all the same.

Do you recommend this book?

I think everyone should read this book, even adults because it teaches a good lesson about acceptance. I give it five stars.

Join 1,255 other subscribers
Follow Saved You a Spot on WordPress.com