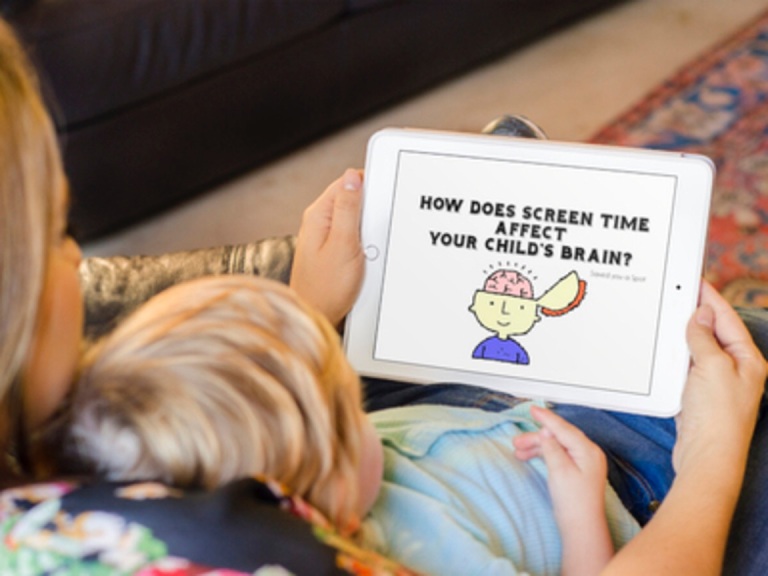 Screen time – today’s reality – with people of all ages spending hours of their time in front of iPads, computers and touchscreens. These can be educational if used in moderation and in the right way however, overexposure can pose danger, especially for young brains. Read on to find out how they can be affected.

Research connects delayed cognitive development in kids with extended exposure to electronic media. Between birth and the age of three, the brain develops at a very fast pace, and is particularly sensitive to the environment around it. Changes, which happen in the brain during these first years are critical as they become the permanent foundation of later brain function and development.

In order for the brain’s neural networks to develop normally, specific stimuli from the natural environment is needed. These cannot be exchanged with those found on today’s screens. When a child is overexposed to screens at a tender age their cognitive development can become stunted.

As seen on http://www.psychologytoday.com, Dr. Aric Sigman, an associate fellow of the British Psychological Society of Medicine, states that too much screen time too soon is the very thing that can impede the development of specific abilities that parents are so eager to foster through electronic media. Their ability to focus, to concentrate, to sense other people’s attitudes and communicate effectively with them, to enrich their vocabulary, can be harmed.

Excessive tablet use at a very young age doesn’t allow cognitive muscles to develop,as the device does the thinking for them, thus leaving them week. For example, a story told on-screen, feeds images, words and pictures all at once to a young reader. On the other hand, a story being told live, makes the person hearing it, use their brain to process the voice into words, visualise pictures and exert mental flow to follow the story.

Research has also shown that screen time at a very young age can cause them to have trouble interacting socially, have difficulty making friends and sustaining relationships. Our brains start to decode and comprehend  social interactions at early childhood. Taking non-verbal cues, understanding the tone of voice used and facial expressions is learned at a very early age. If a child spends all this period in front of a screen, these abilities will be dulled, possibly for life.

In a nutshell, screens can be educational when used appropriately and in moderation. Never overdo it and always allow limited, timed access. The older your child gets the more time they can be allowed on it but make sure they power off regularly. This is necessary to help your child understand the set boundaries between the real and virtual world and to avoid taking extreme measures, such as the ones below, at a later stage. 🙂

Posted by Saved you a Spot

Saved you a Spot

How old might this olive tree be? 🤔 #olivetree #greece🇬🇷
Even the ❤️ 👑Queen of Hearts reads! World book day dress up! 📚
When you are in lockdown and need a crown 👑👸, turn to English Breakfast tea and good old aluminium foil! 🤣
If you are looking for last minute ideas to dress up as a character from a book or general World Book Day ideas then this is the post for you!
Loading Comments...
Comment
×
%d bloggers like this: